Crocodile At My Local Break

I knew it was bound to happen, eventually. I just didn’t expect it to be today.

Benita Hussian, the Editor at Matador Sports, had been visiting me for the past week. We managed to surf almost everyday since she had arrived, and had scored some good waves. But over the last day and a half, the ocean had come to a standstill. We decided to paddle out on our surfboards to the far point. The water was warm and the exercise would be good for us.

We cruised down to the beach around 7:30am. The sun was still low in the sky and the air was considerably cooler this morning. We chucked our sandals onto the lifeguard stand and headed towards the ocean. A couple of fisherman dotted the beach.

“Buenos dias,” we greeted the two closest to us.

A crocodile? In the ocean? Here? I knew it was possible, but I would have to see it for myself.

Thinking about a crocodile in the ocean out front made the hairs on the back of my neck stand up. Over the years, I had heard surfers talk about crocodiles paddling around in the line up at various river mouth surf breaks. I couldn’t bring myself to believe them. Maybe it was the lack of proof or maybe I simply didn’t want to believe them.

Last year rumors were flying around about a crocodile in our estuary. For six years I thought there might be crocodiles in the estuary, and always kept a safe distance. But until I saw one myself, I refused to believe it.  I had quizzed Alonso, the local surf shop owner, about the possibility of crocodiles in our estero.  Not only was it possible, he reckoned, but it was also very likely. Flooding during the previous summer had caused numerous water bodies to open up into the ocean, releasing enough water to create a fresh water channel that would enable crocodiles to travel from one place to another along the coast. Even though I believed Alonso’s words, I could not accept that there was a crocodile in the estuary until I saw one with my own two eyes.

Scanning the water, I spotted something. At first I thought it was a tree trunk. Then I realized the two meter long tree trunk was actually swimming around with its own little arms.

“Lo conozco,” I told the fishermen that I knew the croc in question, “I even have a photo of him from last year, beside the estuary.” 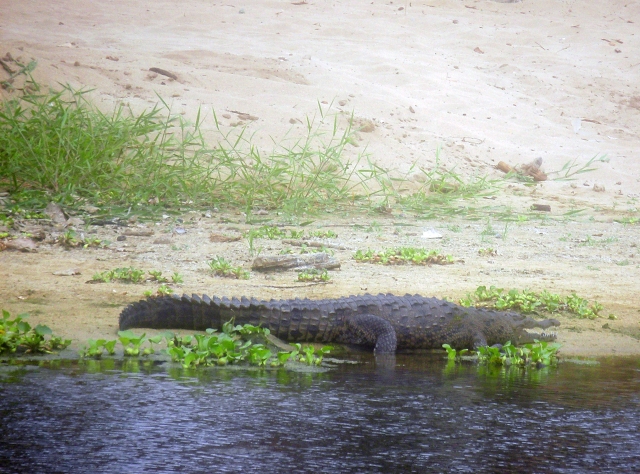